Please find below the activities, which will be presented from March 25th to 27th within the World Forum on Science and Democracy area at Tunis El Manar University (Université de Tunis El Manar, Faculté de Droit, Carrefour de la Citoyenneté).

On March 24th, we invite delegates of the World Forum on Science and Democracy to join the activities proposed by the World Social Forum.

The WFSD will take place every morning from March 25th to 27th to allow delegates to participate to the other activities proposed during the World Social Forum (and to facilitate convergences).

The following programme could be slightly modified: FMSD_Programme_EN

NB. We remind you that the participation to the WFSD is free but that an individual registration for the World Social Forum is needed to attend our forum. 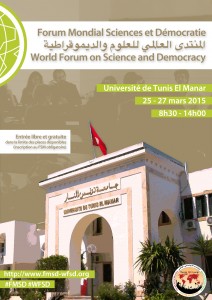 Opening Session of the World Forum on Science and Democracy : Tribute to Vinod Raina
This session will be dedicated to the scientist and activist Vinod Raina. Vinod was a key figure of the alter-globalization movement. He left us a few months after the 3rd WFSD. He was involved in many movements and he participated to the emergence of the World Social Forum and of the World Forum on Science and Democracy. His commitments for peace, education, scientists consciousness and their involvement wih civil society will guide this opening session thanks to the testimonies of his friends. This tribute will be a launching pad for three days of activities.
With: Anita Rampal (BGVS, India), Amit Sengupta (AIPSN, India), Pat Mooney (ETC Group, Canada), Fabien Piasecki (Fondation Sciences Citoyennes, France), Gus Massiah (IPAM, Conseil international du FSM, France), Hamouda Soubhi (Alternatives, Morocco)…

Workshop: Science is a common good! Experience of two NGOs and perspectives for action
We will expose the thinking, approaches and practices of two NGOs – Association Science et Bien Commun (~Science and Common Good Association) in Québec and Association pour une Fondation Sciences Citoyennes (~Association for a Citizens Science Foundation) in France – opened to academics and non academics and which aims at promoting science as a common good within society and the “academic world”. We will show that these experiences are meaningful and we will discuss the conditions of their extensions in different regions or countries.
With: Samir Hachani (Association Science et Bien Commun, Québec, Algeria), Rémi Barré (Fondation Sciences Citoyennes, France)…

Workshop: Mining and public control
The panel, ‘Mining and public control’, will draw, from some precise examples, the main lines of a comparative survey (including in particular Africa and Latin America) of legal frameworks (mining codes, place of the local public authorities, etc.) and forms of organization and mobilization citizens around, either industrial or traditional, extractive practices. This sharing of analysis and experience should join over time thanks to the started of an international network Earth and mines, gathering public researchers, NGOs, associations, local governments, labor unions, professionals of the concerned fields of activity. The meeting of Tunis will be part of a series of meetings both in sub-Saharan Africa and in Europa (Ouagadougou, February and December, 2015, Paris, July, 2015).
With: Michèle Leclerc Olive (CORENS, CIBELE, IRIS, France), Larbi Bouguerra (Tunisia), Achille Ngwanza (Cameroon)…

Workshop: Universities of the XXIst century
The society of the XXIst century should be the society of knowledge and the human emancipation by the satisfaction of the human needs and the citizenship generalized. The orientation taken by the majority of the political leaders turns the back on this ambition. The pillars which should be research and education are neglected or subjected to the market needs. The knowledge tends to being brought back to know-how; the obscurantism and the irrationality are developing. The universal access to the knowledge – whatever the social, the geographic origin or the sex, the ethnic group or the religion – is a major challenge: we will focus in particular on the case of the African continent by working out together – social movements of citizens and academic world of the “South” like “North” – the diagnoses, the proposals and the necessary interventions. The type of knowledge is also to redefine: rational and critical education as well as education to democracy are to be reinvented. Which contents, which pedagogies, which institutions, which personnel with this intention?
With: Isabelle de Mecquenem et Pierre Chantelot (SNESUP, France), Smati Zoghbi (SNCP, Algeria), a representative of FGESRS (Tunisia), Jean-Paul Lainé (World Federation of Scientific Worker)…

Workshop: Training citizens engineers
It is crucial that critical thinking have a place at engineering schools or universities. In pursuit of this goal several initiatives undertaken by students have emerged, either through the construction of a citizen curriculum, setting up a debate on education regarding content and governance issues, promoting networking between actors engaged in training “citizen engineers”and building bridges between academic research and activism on the topic. The workshop will propose a discussion on these issues and the way to put them into practice in different parts of the world , based on the experience of students in Tunisia, and Engineers Without Borders members from France and Belgium.
With: Judith Pigneur (Ingénieurs sans frontières, France), a representative of ISF Belgium, Aïda Bergaoui Sriha (Atuge, Tunisia)…

Workshop: Civil society in action for the governance of emerging technologies (such as nanotechnologies and synthetic biology)
We understand the so called environmental governance as a structure of government/ administration, with claims of sovereignty over the normative global order, hiding processes of accumulation by dispossession of the common goods. Our interest is to think about/ learn from the experiences of struggles for rigths. The way in which environmental justice struggles and some state institutions create tension to that governance structures when they affirm the priority of collective rights over private property and profit with the commodification of nature.
With: Jim Thomas (ETC Group, Canada), Mauricio Berger (Argentina), Niclas Hällström (What Next Institute), Michael Reinsborough (Breaking the Frame, UK), Synenergene (European Union project on Responsible Research and Innovation in Synthetic Biology), Synbiowatch…

Workshop: Stakes and challenges of participatory democracy in Tunisia
Since the fall of the authoritarian regime in Tunisia, local governments are is taken over by a large number of claims. Soon, it appears that there is an urgent need to have a local level of government that is more responsive to citizens’ concerns. It emerges a compelling need for co-production of local public action. In this regard, participatory democracy in Tunisia comes not as a response to a failure of representative democracy never experienced, but as a response to a necessary democratic radicalism. It is not by coincidence that the new post-revolutionary constitution enshrines the principle of participatory democracy in his chapter on local authority. Beyond the policy statement, such an undertaking is not without difficulties. The first participatory budget experiments ever conducted in Tunisia are there to remind this truth. The regulatory framework and the project financing are to be constructed. Our workshop aims at working towards this end.
With: Lofti Tarchouna (Doyen de la Faculté de sciences juridiques et politique de l’université de Sousse, Yosry Magdiche (Centre de Formation et d’Appui à la Décentralisation-CFAD), Yassine Turki (Association Tunisienne des Urbanistes-ATU), Hmed Guidara (directeur financier de la Mairie de Sfax), Bèdis Bouziri (Mairie de La Marsa), Ghazi Gherairi (Faculté des Sciences Juridiques, Politiques et Sociales de Tunis)…

Workshop: Science, technology and the climate crisis – Avoiding false solutions (geoengineering, fracking…) and promoting essential contribution of an appropriate research
The next UN Conference on Climate will take place at the end of the year in Paris. We will present the work of IPCC (Intergovernmental Panel on Climate Change) and we will have a critical approach of industrial research on climate change. We will also discuss about what we consider as “false solutions” to face climate crisis (geo-engineering, fracking, biofuel…).
With: Jim Thomas (ETC Group, Canada), Antoine Simon (Friends of the Earth, Europe), Chantal Pacteau (SNCS, France), Fabien Piasecki (Fondation Sciences Citoyennes, France), Christian Pilichowski (Transform!, Europe), Michael Reinsborough (Breaking the Frame, UK)…

Workshop: Ethics and responsibility of scientific workers
As citizens, the scientific workers have to face a challenge: what is their responsibility concerning the damaging effects of the “techno-science”? There is a link between techno-science and economic growth. The workshop should address the role of the economic and political context as factor of a responsible behavior. In particular, what social protections or legal guarantees must be ensured? This question is raised at the time when UNESCO is working on a revision of the “Recommendation of 1974, concerning the condition of the scientific researchers.”
With: André Jaeglé (World Federation of Scientific Workers), Les Levidow (Open University, UK), representative of UNESCO (to be confirmed)…

Workshop: Education to science, transition and citizenship
Education through the practical implementation of principles, actions and experiments is a crucial tool for raising awareness on citizenship and science in general and on climate change and transitions in particular. Such education needs to provide for the means to inform and share knowledge, but also to develop people’s will and capabilities. Discussing about values and practical approaches in education, as a key element to reclaim ownership on environmental, scientific and citizen issues, and spark off local action is crucial. Thanks to sharing experiences from India, Tunisia and France, we will show how these questions should be considered as a major democratic stake.
With: Anita Rampal (BGVS, Inde), Hend Khiari (Ministère de l’Éducation, Tunisia), Fanny Simon (Petits Débrouillards, France), Wided Oueslati (Tunisia)…

Workshop: Exploring the current trends in citizens, participatory and community based research practices and the challenges of the transition to democratic governance structures
Have citizens, participatory and community-based research made a difference, influenced the circumstantial events to lead dissident movements for democratic social change, or caused a radical transformation of state institutions through the application of knowledge and technology?  If so, where has this occurred? The workshop will provide space to inform a coherent vision and deploy methods to cross fertilize local civic engagements, share collaborative applications and creation of knowledge in promoting democratic social change narratives for the benefits of all. The discussion will reflect on lessons-learned from the regional specificities, examine cross border effects and, will be multinational and result oriented with recommendations for proposed action plans.
With: Khan Rahi (Canada), Rémi Barré (Fondation Sciences Citoyennes, France), Bénédicte Goussault (AITEC, France), Mounir Hassine (FTDES, Tunisia), Mauricio Berger (Argentina), Boubacar Kante (Enda Tiers-Monde, Senegal), Amit Sengupta (AIPSN, India)…

Workshop: Collaborative spaces and tools for democracy
During this workshop, various projects defending democratic values at different levels (from community level to global level) will be presented. Among the topics we will deal with, we can mention the initiative for an “Internet Social Forum” (which aims at rethinking the regulation and the governance of the Internet, and the role that civil society could have there) and Democracy 2.1, a new and more efficient vote system,, which would facilitate decision making. New collaborative methods and platforms will also be presented.
With: Prabir Purkayastha (India), Lex Paulson (USA), Karel Janeček (Czech Republic), Léa Laval (France)…